Audrey Balderstone's floral artistry skills, have won her yet another Gold Medal for one of her exhibits. This time it was for a joint effort with her friend Yolanda Campbell - who has been helping her organise recent Flower Festivals at Stanborough Park Church. Both are members of Watford Floral Society. As former Chelsea Gold Medallists they were asked to represent the Home Counties Area of the NAFAS when it was invited to enter an exhibit at the Harrogate Agricultural Society's Annual Spring Show.
According to Audrey "as well as many individual competition pieces in the Floral Art section they invite four Areas of NAFAS to compete. This year the Home Counties Area was invited. Each Area was given a space of 3m x 3m and a title and allocated a city' with the task to representing a street scene there in flowers. Having been given London they decided to take the Notting Hill Carnival as their theme.
Their exhibit, which took three days to prepare, is described by Audrey as "four large metal circles - each slightly smaller than the other. Then came the task of covering the metal! We used hundreds of chrysanthemum heads to cover the cross bars and hundreds of succulents to decorate the circles. Through the centre we had a large floral display which used 100 stems of asparagus fern and 100 stems of Gloriosa Lilies plus many other flowers."
Audrey has used her talent for floral artistry in many positive ways and has raised money for many good causes with her flower festivals. In March she ran a flower arranging workshop for beginners at the church to share her knowledge and allow others to discover previously hidden artistic talents.
Since then Audrey has featured in an interview to be found on YouTube talking about her love of flowers and her ministry of flower arranging. 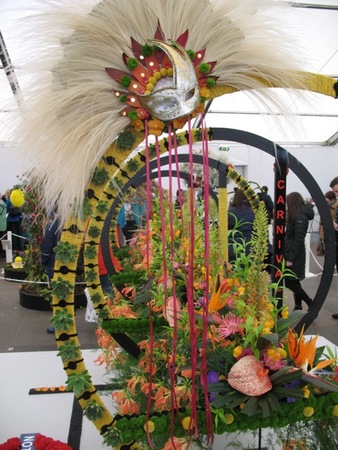