One election in the autumn of 2019 that didn't cause any heated discussions was the appointment of Stanborough Park's own talented floral artist Audrey Balderstone to the role of Chairman of the Home Counties Branch of the National Association of Flower Arrangement Societies (NAFAS) an educational charity which is divided into 21 local branches.

Having been elected to the role of Vice Chair three years ago Audrey assumed the role of Chairman (by default) for the next two years on Thursday, 14th November, at the Home Counties Area Day at the Spotlight Theatre in Broxbourne.

Audrey has won many medals for her floral arrangements including two at the prestigious Chelsea Flower Show and has organised many charitable floral events including some for the society so it was hardly surprising that she was selected for her new role.

Speaking of her new role Audrey says, "I feel very honoured to serve the Area but it is not a position I sought. I have been asked a couple of times in the past 15 years but have always declined because a. I was too busy (still am!) b) I thought I was too old (am even older now) and c) The Sabbath was a problem because I could not attend events on Friday night/Saturday.

"Three years ago, when I was even more busy and even older I very, very reluctantly allowed myself to be persuaded to become Vice Chairman and later Chairman.

They said Sabbath was no problem. it has meant that there have been a number of events I have not been able to attend but everyone understands that and it has not been a problem.

"I have served as Vice Chair and Chair of the Judges, Demonstrators, Speakers and Education Committee for the past three years

"2020 will be the Diamond Anniversary of the Home Counties Area so a number of events are planned including a trip to a garden in Cumbria, a visit to the Blackburn Cathedral Flower Festival, a Members’ Day, an Afternoon Tea, a Chairman’s lunch and Special Anniversary Demonstration.  We may also do a Flower Festival towards the end of the year.  We also organise floral arranging competitions and supply arrangers for Westminster Abbey a couple of times a year."

Audrey has just accepted the role of church elder and will certainly be kept busy during 2020.

She speaks about her ministry of flower arranging on YouTube: https://youtu.be/ECYJfEVoo74 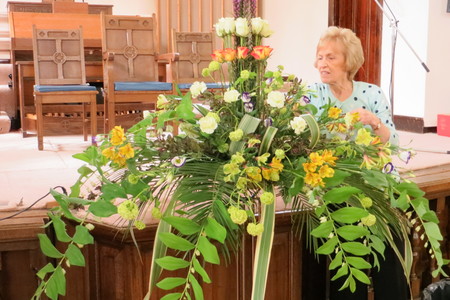